Leave a comment
By Nobody Comic Book Reviews, Comics 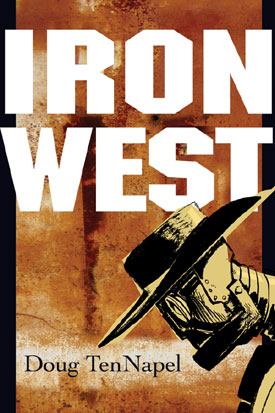 I read Iron West in a single sitting. Not because it’s short, but because Doug TenNapel tells the story visually foremost, using dialogue only when necessary. I would love to list my favorite moments (the use of “engines” for instance) but they are good enough to warrant me not spoiling them for you.

Iron West represents TenNapel’s most streamlined storytelling. It is pure story. Gone are his trademark digressions on hobbyhorse issues that, whether you agreed with his point or not, sometimes interrupted the narrative a bit. Perhaps because this is a period piece, such references to our culture were simply impossible. But whatever the reason for their absence, the result is TenNapel’s most efficiently told tale, whose implicit applicability to current politics remains completely subtextual.

It’s also TenNapel’s best piece of extended sequential art for two reasons. First, his style (I believe) has improved, in both drafting and inking. His cartooning is better (compare Iron West’s lead female character to her counterpart in Creature Tech) and his shading technique sometimes resembles the look of a woodcut (particularly appropriate for a Western-themed comic).

Secondly, his unmistakable style matches the story better than any of his previous graphic novels. Though none of his comics can be categorised within a single genre, TenNapel seems to have been born to draw whatever genre Iron West belongs to.

Though it includes them, “Cowboys and Robots” is not a sufficient description of Iron West, and I was surprised a number of times by the ingredients TenNapel adds at regular intervals to his wonderful stew. My only reservation about reading Iron West: don’t read the blurb on the back cover in which Moriarty spoils the magical recipe, because it’s best discovered in the course of experiencing TenNapel’s confection firsthand.