5 Comments
By Nobody Batman, Movies

At Wizard World Chicago there was a Dark Knight panel on Saturday composed of Christopher and Jonah Nolan, David Goyer, Christian Bale, Aaron Eckhart, and Gary Oldman (but not Heath Ledger). They showed a teaser with actual visual footage this time, which I haven’t been able to find online — check out how tight (and sartorially clever) the security was here — but there is a description of the footage contents here (minor but highly gratifying spoilers).

The most interesting comment from the director was this one:

What are the most important aspects of the Joker that you needed to incorporate in this film?

CHRISTOPHER NOLAN: We looked at it the other way around. We found a way of looking at the character and saw what role he would play in the film. The Joker card at the end of the first film created the right kind of feeling. That was the hook that got us thinking about the next one. We were looking through comics and Joker stories and we started writing the treatment before we even wrote “The Prestige.”

Jonah [his brother and screenwriter] called me and said, “Have you read the first two Joker appearances?” I had but not in a really long time. We’ve come around to something that’s eerily close to those first two appearances.

I’ve never read them but now I’m really curious to read the first two issues with the Joker. All I know is that he was based on Conrad Veidt’s character in The Man Who Laughs, the Victor Hugo adaptation of ten years before which was recently featured in The Black Dahlia (another Eckhart film). 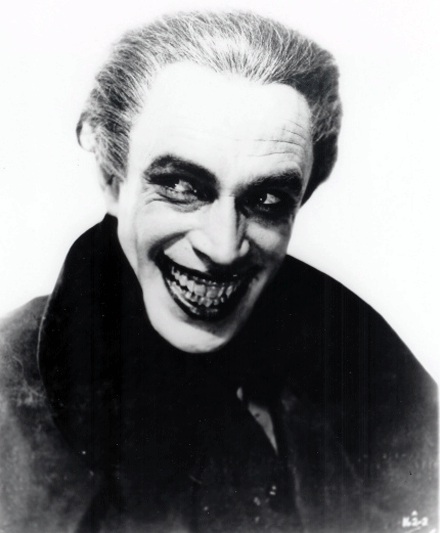 I’m also impressed by just how clever and shrewd Christian Bale is. After the filmmakers expressed a lack of interest in a World’s Finest film, Bale threw the fans some red meat without actually making a verbal statement that could be quoted:

On a scale of 1 to 10, is there any interest in a Batman/Superman World’s Finest movie?

DAVID GOYER: For me, after working on this project, it’s zero.

JONAH NOLAN: When I was a teenager, my brother gave me a copy of The Dark Knight Returns, which has a very similar scene in it. I couldn’t put a number on it.

CHRISTOPHER NOLAN: Creatively, I’m burned out so I have no interest.

PAUL LEVITZ: What do you say, Christian? Do you want to wrestle Superman? [Audience roars]

CHRISTIAN BALE: [Nods confirming he’d like to as the audience screams in excitement]

The rest of the panel comments are available here.