2 Comments
By Nobody Movie Reviews

Most movies would be disappointing after the It-Job but I needed to see Josie and the Pussycats because my girlfriend Rosario Dawson has been pestering me to complete her back catalogue. However I was pleasantly surprised to find it a satirical version of Zoolander, with the recording-industrial complex as the center of a mind-controlling conspiracy instead of modelling agencies. Since Josie was released a few months before Zoolander, however, I guess it has the prior claim.

Parker Posey plays the Mugatu/Will Ferrell character who reveals secrets such as VH1’s Behind the Music being a way to exploit the demises of bands which they cause in the first place when performers get suspicious. I never thought a movie’s most memorable moments could be cameos by Carson Daly and the disembodied voice of Mr. Moviefone, but it’s hard to see either one of them the same from now on. Furthermore, watching it five years later makes simple jokes like “Heath Ledger is the new Matt Damon” eerily prescient after Brothers Grimm, and the logos all over the Target-sponsored Lear Jet make it look more like U2’s Vertigo tour plane.

Given that it sends up the cutthroat world of teenage commerce, it’s unsurprisingly the most product-placed movie you’ll ever see and half the fun is seeing how tacky it gets, such as a McDonalds shower complete with a french fries sponge. But admittedly, there are so many levels of self-conscious irony you begin to second guess whether the movie is itself just a cleverly pre-emptive innoculation against a real conspiracy. 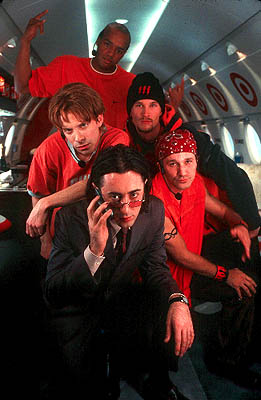